Care For Your Air

Does your workplace make you sick? And no, we’re not talking about annoying bosses, heavy workloads or the inevitable train delays every morning. As infuriating and stressful as all these things are, there’s a strong possibility that the air you are breathing indoors is polluted, and could be making you sick. We all know the adage, coughs and sneezes spread diseases. Well, there’s probably someone coughing or sneezing around you right now, and sharing their germs with you. 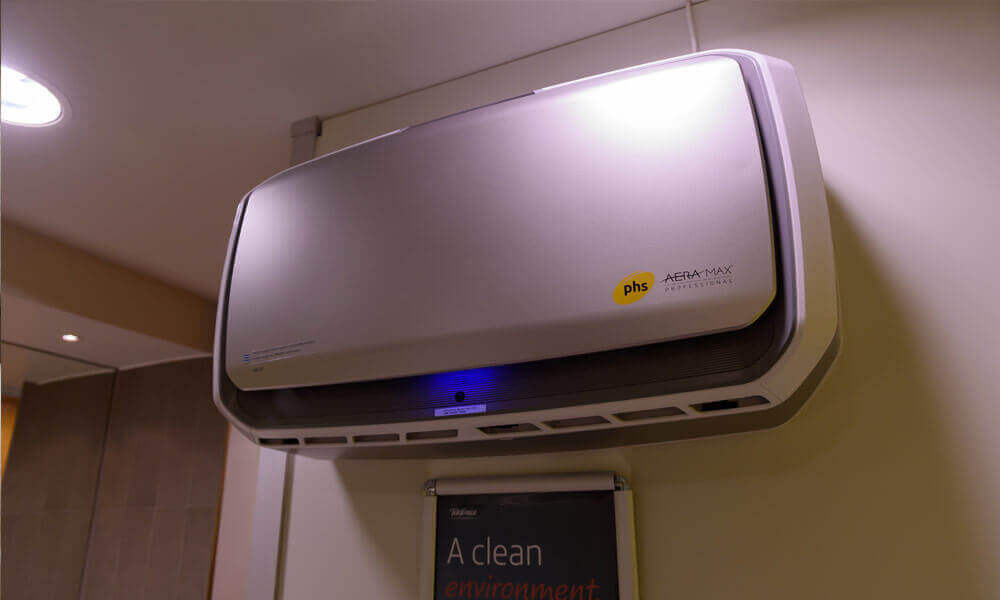 Far from being a new environmental concern, air pollution has been around for a long time and researchers have been studying the effects of air pollution on the nation’s health for decades.

Air pollution increases the risk of some serious illnesses, and can make existing conditions, like respiratory disorders, worse. "All of the organs in the body seem to be affected in some way by breathing in air pollution," says Professor Frank Kelly, Director of the Environmental Research Group at King's College London.

Indoor pollutants such as, germs, bacteria, viruses and pollens wreak havoc wherever people are gathered together. From schools and offices to waiting rooms and leisure centres, viruses and pollen lie in wait, ready to invade the cells in noses, throats and lungs. Symptoms are unpleasant and debilitating, ranging from fever, itchy eyes, sore throat, coughs and sneezes to chills, muscle aches and fatigue. Learn more about how phs can help clean your air, and alleviate the symptoms of common coughs and colds.

The number of people in the UK suffering from hay fever is expected to double over the next two decades according to experts at the National Pollen Research Unit. This is due to an increase in the level of air pollution in our towns and cities. There are currently around 15 million hay fever sufferers across the UK. And as we know, flu is highly contagious and generally afflicts between 15 and 20% of the population each year. That equates to a lot of sick employees, lost work days and reduced productivity.

A report by the Co-operative Pharmacy in 2010 found that a total of 7.6 million working days are lost each year in the UK to flu, costing the British economy £1.35 billion. Its survey of more than 3,000 people showed that flu accounted for the most number of days lost among short-term illnesses.

So can this burden be reduced? The standard advice to reduce the risk of flu is to encourage employees to get themselves vaccinated; telling people with symptoms to stay at home; and urging use of tissues to prevent the spread of germs. And there is a plethora of over-the-counter remedies to help ease the symptoms of hay fever. These all help up to a point. But what no one talks about is the potential for simply removing the danger from the air.

A high efficiency particulate air (HEPA) filter is designed to remove particles from the air passing through it. To qualify as HEPA, it must remove at least 99.97% of particles that have a size of >0.3 microns. That includes the flu virus and pollen. AERAMAX® PROFESSIONAL is an air purifier with a HEPA filter that has been shown in an independent laboratory study to remove 99.9% of the airborne flu virus within 35 minutes of operation, filtering ambient air several times an hour.

As soon as an infected person coughs or sneezes, the purifier gets to work, trapping the minuscule particles before they can be inhaled by someone else. The more contamination sensed the harder the purifier works, until contamination levels fall. Of course, it will deal with other indoor pollutants as well, from dust, pollen and mould spores to gases and odours. Click here to see all the benefits of AERAMAX PROFESSIONAL.

And it’s not just air purifiers that are working hard to clean our air. According to the NASA Clean Air Study that was published in 1989, there are also a number of indoor plants that remove harmful toxins from the air, such as those found in everyday items that are likely to be in your office building! These include benzene in plastic resins and paints, ammonia in cleaning products, and formaldehyde in paper towels, carpets, plywood, tissues, and computer equipment.

Frequent exposure to these ‘everyday toxins’ can have a negative impact on your health as they cause a range of symptoms that can make you feel generally unwell. These range from headaches, dizziness, nausea, and vomiting, to a sore throat and irritation of the eyes.

cause Sick Building Syndrome (SBS), where an individual experiences these unpleasant symptoms, and other adverse health effects, after spending an extended period of time in the same building, such as their place of work. As well as removing these everyday toxins from the air, office plants also absorb carbon monoxide and CO2. These, in high levels, can be extremely harmful to both human health and the environment. Bring the outside in, and see how Greenleaf can help improve health and well-being in your business.

So maybe it’s time to consider that targeted air purification has more to offer than simply improving the quality of the air. It could play a significant part in combating the costly annual blight of flu and hay fever, along with other indoor pollutants found in highly populated, shared spaces such as the office, classroom, waiting rooms or fitness studios. What Should Be in a First Aid Kit?